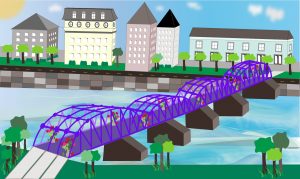 “Houston, we have a problem!”

Crisscrossing the country from Seattle to Miami, San Diego to Bangor and all points in between, the United States has become a Divided States.  I wrote a post late last year about walking to the middle of a bridge to meet another person, look into their eyes and recognize what we have in common in order to heal the distrust between us.  But what an understatement to say a lot has happened since then.  When I see the images and video clips of January 6th; when I take in the wave of voter suppression laws being enacted across the country; when I contemplate recent legislation in the state of Texas; when I absorb the enormous disbelief in science by a faction of people in the United States; I not only feel depressed, but also harbor deep doubts that the divisions between us can be overcome.  How do we resolve how much we’ve grown apart and devolved as a nation?  How do we come together to solve the urgent and pressing issues of today?  How do we heal?

Name it, Claim it

We have to admit there’s a problem — name it — claim it — accept it — before we can work out solutions.  Politically, many of us are far, far apart.  Are you red and bent on “owning the libs?” Are you blue and convinced that all conservatives are hypocritical dolts?  A Pew research study from 2019 reveals that since 2016 there has been an increase in members of each party believing that the other side is more close-minded and more immoral.  And even as the parties have grown more critical of each other, 85% of Republicans and 78% of Democrats concede that partisanship is increasing and dividing the country.

No Red States, No Blue States?

I can’t help but remember Barack Obama’s debut onto the world stage at the Democratic National Convention back in 2004. The U.S. Senate candidate famously declared,  “…there is not a liberal America and a conservative America — there is the United States of America. There is not a Black America and a White America and Latino America and Asian America — there’s the United States of America.”  His oratory sounds almost quaint to me now.  Don’t just think about  — cogitate —  everything that we’ve been through since 2004.

Maybe I agreed with Mr. Obama back then.  But now, I’m inclined to disagree.  We are a divided country. So, again, where do we go from here?  Who (and where) are the luminaries who will inspire and lead us out of this morass?  Maybe one answer is to stop looking outside of ourselves to the so-called leaders, or a savior to rescue us, but rely, instead, upon ourselves.

This morning I thought again about the symbolism of a bridge that might exist to bring us together.  Not a fairyland bridge in Arcadia, because we’re still going have disagreements over difficult issues; but a place to meet, a middle ground, to look at each other and affirm what we still have in common:  safe communities to raise our kids, clean air to breathe, access to healthy food and uncontaminated drinking water, educational opportunities for all, upward mobility, good, well-paying jobs, affordable healthcare.  I also realized that before we can physically meet on that bridge, each one of us has to go to the place inside ourselves that would foster the civility and harmony, reconciliation and forgiveness required to reconnect us.

But indulge me for a moment longer, and let’s keep going with this idea of the bridge being real.  In my vision, I see a platform next to the bridge, a place to step up and strip off the branded elephant and donkey teamwear.  Out with the tired, tribal red and blue. For a night of celebrating, the theme is funky purple.  The streetlamps are on, lighting up a massive purple bridge filled with people, music and laughter.

Out of curiosity, I searched for “purple bridge” on Google.  Until today, I didn’t know The Purple People Bridge existed!  Officially known as The Newport Southbank Bridge, the structure is entirely purple and stretches across the Ohio River connecting the states of Kentucky and Ohio.  About a half mile long, the bridge was originally erected for rail transportation in 1872.  After being closed in 1987 to train traffic, and later to automobile traffic, it reopened as a pedestrian walkway in 2006 after an extensive renovation. But why paint a bridge purple?  The story is the developers conducted focus groups to determine what color it should be.  The final two colors everyone could agree upon were green and purple. A community volunteer Ted Bushelman cast the deciding vote saying, “Purple is a good color for public consumption.  If you paint a room purple, it can drive you crazy. But it looks good on something like a bridge.”  According to the official website, the bridge is a “people magnet” now.  It’s an open space for walking, talking, running, biking, skating, celebrating and, hopefully, meeting in the middle.

I am not discounting peaceful protests, marches, boycotts and get out the vote efforts to bring about social and political change.  But lasting change for greater harmony and equity in our society is an individual “inside” job that expands exponentially.  Each one of us has to change the biased thinking that’s gotten us to this point in time.  And what’s to come in the future won’t be perfect, nor will it necessarily come easily, but if we make the effort now the future will be better… for all of us.

Towards the end of Barack Obama’s 2004 convention speech he said this, “I’m not talking about blind optimism here … I’m talking about something more substantial … Hope in the face of difficulty. Hope in the face of uncertainty. The audacity of hope! In the end, that is God’s greatest gift to us, the bedrock of this nation. A belief in things not seen. A belief that there are better days ahead.”  Mr. Obama, on this, we agree.  If you do, too, then meet me on that Purple Bridge over the Ohio River. Come with a heart that’s been searching, one that’s open, more enlightened, tolerant and accepting.  Wear some purple, and let’s have a wild, wild party!  We’ll set off firecrackers and dance that half mile together from Newport to Cincinnati.

“The world is getting too small for both an Us and a Them.  Us and Them have become codependent, intertwined, fixed to one another. We have no separate fates, but are bound together in one. And our fear of one another is the only thing capable of our undoing.”

“… A sense of humour and compassion: these are universal, and people from all backgrounds can be united by these. People are actively looking into the world for reasons to see what they believe to be wrong in others, and huddling together in their small groups; rather than actively looking to find what they can laugh at together. Or what they can help, together.”